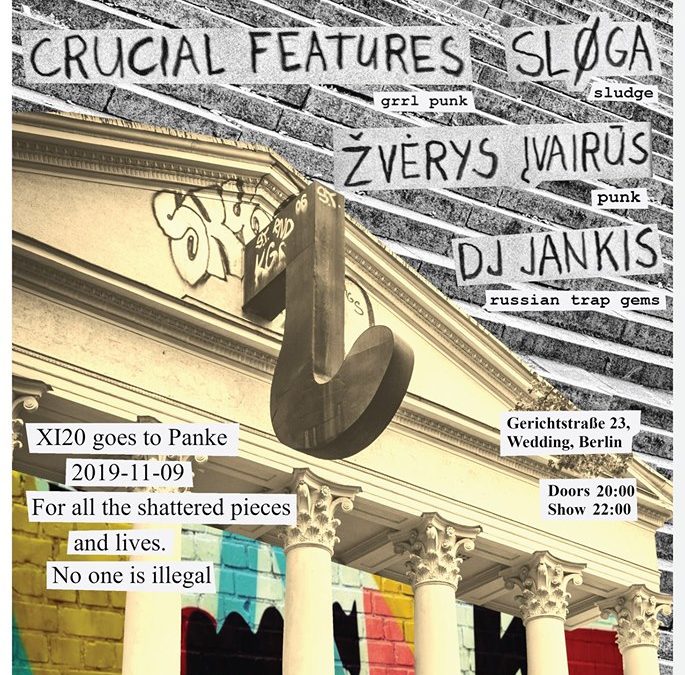 We are very happy to be part of the European Club Night series in Berlin, supporting a good cause in collaboration with the Club commission.

The European Club Night gives us the opportunity to come together through music and to create awareness about the social and cultural significance that the 30th anniversary that the fall of the Berlin Wall marks.

The venues participate with their resident artists and crew members, joined by many regular guests from their home city who will also travel to Berlin. The event will also inspire to build up long-term partnerships and to maintain regular artistic exchange.

*Žvėrys Įvairūs* (Beasts miscellaneous) is a punk rock band from Vilnius. The members are considered as oldtimers in Vilnius punk environment, some of them you could meet in far 1988 with a mowhawk and quite a solid amount of safety pins. But life is changing and somehow the beasts are not anymore beasts in the true sense of the word. Probably they also afraid of liver cirrhosis as it is realistic in their case. At least they still feel dependency for punk rock, not so pistols style, not so political rant, more into depresive lone howl. Some say they know how to play their guitars.

*Crucial Features* – Catchy riffs, dynamic vocals and vigorous drums are the tools the band uses to serve their frustration towards post-soviet Lithuanian society – it’s always fast, angry and will make you stamp your feet.

*SLØGA* – Formed in 2014 from a few members of the XI20 collective in
Vilnius, SLØGA plays noisy melodic hardcore-sludge with psychedelic
tendencies, vibes of confusion and anger.

Band is formed by a handful of terrible people referring to themselves exclusively as Partners.

Despite Partners’ very minimal human attractiveness they are eager gig players. Invite them and they will play the Sunshine-set and right after a break the Sunset one. You will dance and be happy, but then your hair will turn silver.