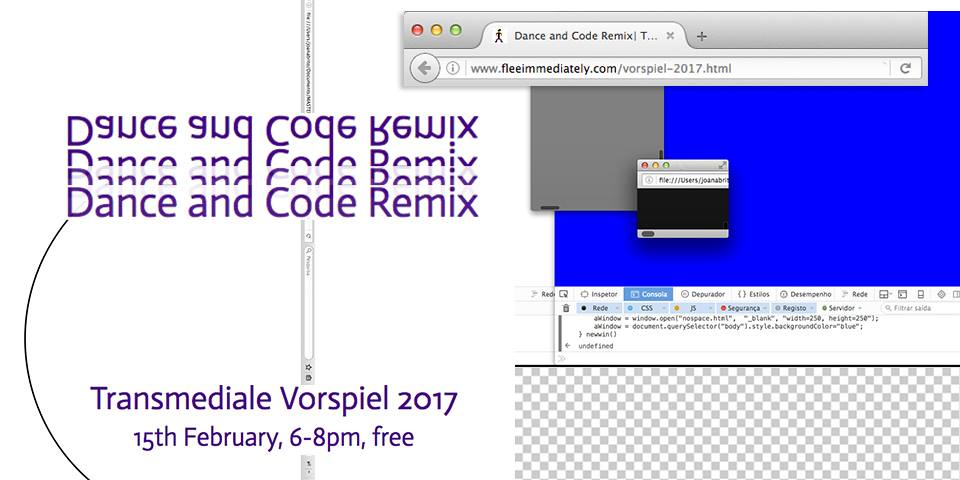 Flee Immediately!, with Joana Chicau, will present a series of workshops and performances experimenting with choreographic relations and code, from bodies of code to actual bodies, from digital deviations to physical ones. This includes a performance that reframes aesthetic experiences through the poetics of web programming languages and tango as choreography, a workshop enacting basic programming through dance, as well as experiments relating code, poetry, movement, and control, and more. The event series is part of a larger collaboration and research that began in Flee Immediately! issue 02.

Bodies find ways to perceive the space mediated by the computer screen. Will you dance with me? is a durational experiment on adjusting one’s position, location, sense of presence to each other, while in different locations.

One-on-one participants are invited to dance lonesomeness together.

While starting to address the subject of distributed location of the self this work is also included on the larger project TRANSCODING – a series of works dedicated to explore the internet, its affections, and representations of human agency in a multiplied, transitory and fractalized nature.

**** 𝐌𝐚𝐧𝐮𝐞𝐥 𝐑𝐨𝐬𝐬𝐧𝐞𝐫: 𝐅𝐫𝐚𝐦𝐞𝐰𝐨𝐫𝐤****
Across all devices and realities it’s the white walls, shadow gaps and neutral lightning which charge our objects with meaning. „Framework“ disassembles the space in its components and recomposes it the way nowadays post-production does it.

**** 𝐁𝐁𝐁_: 𝐈𝐝 𝐫𝐚𝐭𝐡𝐞𝐫 𝐛𝐞 𝐚𝐧 𝐢𝐩𝐡𝐨𝐧𝐞 *****
A performance directed for the album release show „ID RATHER BE AN IPHONE”, it presents both artists as mediums between so-called digital and physical realities, involving subjects like trans-post-humanism, body enhancement, AI and its emotionality and irrationality, biotechnology and robotics, and “the future” that already happened. In this multi-layered performance artists mediate their visions with live-synthesized voice, own emojis, visual poetry and their intense physical presence.
In 2017 BBB_ will release their first music video „Y“, produced first in China and then in Germany, where the project currently resides.

**** 𝐃𝐚𝐧𝐜𝐞 𝐏𝐚𝐫𝐭𝐲! 𝐮𝐧𝐭𝐢𝐥 𝐥𝐚𝐭𝐞 ****
We can continue the dancing with the event organised after by Panke and record label etcetera. More details soon.