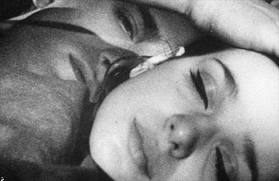 ‘’Shadows’’ started on 13th January 1957 as a dream in one loft in New York. I thought about few figures, which my students were alike, and changed the situations and the age of the figures so much, that in one moment we all became these figures. An improvisation was particularly essential. It is about a black girl, who is considered as a white one. There was a typical, melodramatic situation, in which she is seduced by a young man, who, after all, finds out she is black. I chose this kind of situation in order that actors get something specific and emotional to react on. And then I got a wild dream to hold on with the improvisation of the camera. (From Ray Carneys’ ‘Cassavetes about Cassavetes’)

J. Cassavetes’ first feature ’’Shadows‘’, is a jazz-scored improvisational and rather spontaneous film, which explores interracial friendships and relationships in Beat-Era (1950s) New York City. However, as the director stated himself, the film is more about human problems, and not about the racial ones. Conceptually and stylistically the movie is oriented towards neorealism, which influenced Cassavetes a lot.
John Cassavetes, following Morris Engel, Lionel Rogosin and Shirley Clarke, is generally regarded as one of the most important American indie movie makers. Working himself as an actor in commercial film-projects, he used the money he earned to produce and finance his own movies. His family supported him not only financially, but also by appearing in his films as leading or accompanying actors, above all his wife – Gena Rowlands – his dearest love and muse till the very last moment.