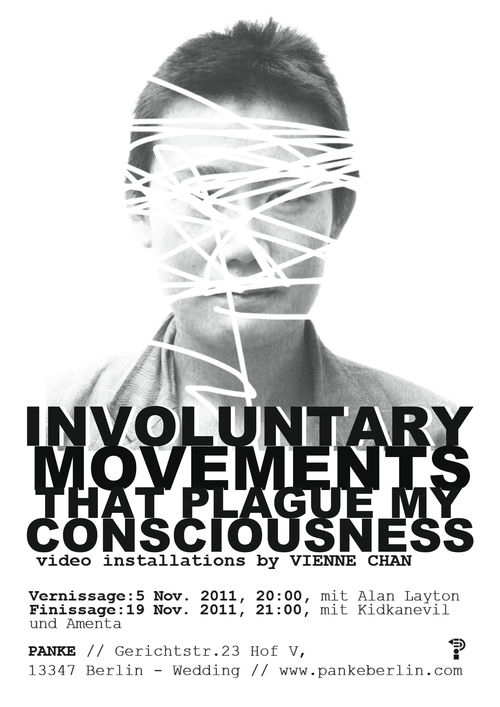 The event takes place on the  5th of November.

Video works based on actual nightmares the artist had in 2011.

VIENNE CHAN was born in Hong Kong and studied the philosophy of religion in Canada. In 2007, she began making experimental videos independently. Marked by a personal approach that often inflects an intimate relationship with the subject matter, Vienne’s work has been shown extensively in new media art festivals, such as Les Instants Video (Marseille), Festival Images Contre Nature (Marseille), Re:New Festival (Copenhagen) and Kunstfilmtag (Düsseldorf). Her works have appeared in publications such as Bref Magazine (France) and The Future of Art in the Post-Digital Age (University of Chicago Press). In 2010, she was awarded a Pépinières européenes pour jeunes artistes residency, which was hosted at Clube Portugues de Artes e Ideias, and Plataforma Revolver in Lisbon, Portugal.

from Monday till Saturday

Vernissage today from 20:00 together with Alan Layton playing Live:

Alan Layton was born in London, England. He studied Town & Country Planning and then took training in classical vocal technique and bass guitar / music theory. He moved to Berlin in 1998, and played bass guitar in a variety of bands including “Kinch Blade & The Black Lilies” and “Johnny Zabala & The Signs”, while creating his solo project “Stories In Colour” – soundscapes inspired by his studies in urban planning. He has recently collaborated with Daniel Ahl (drummer and experimental musician) and Cristóbal Schmal (graphic artist), creating sound installations involving text collage. In Spring 2011 he worked as events organiser at ECC, Berlin Weissensee. On Saturday, 5th November 2011 he will perform at Panke with saxophonist Florian Constantinides.