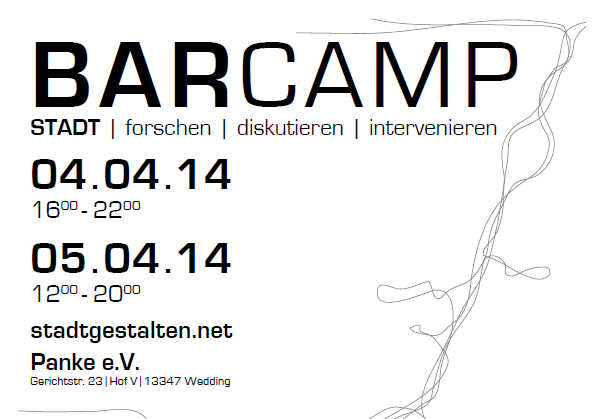 How do you live in your city and in what kind of city do you want to live?

The educational work of the Berlin Heinrich Böll Foundation and the city: make – network of young Urbanist_innen invite you to a weekend of sharing and cross thinking about the city. On 4 and 5 April, we want to reflect with you in the Panke on urban research, intervention and design and discuss. Together, we hold an open conference, her itself determines the content in – a Barcamp.

The past decades were characterized worldwide by a steady growth of cities. Berlin is also listed for some years a significant increase of the population – with both positive and negative consequences. According to forecasts, this trend will continue, so that Berlin will also be exposed to the future of a dynamic process of change. Every process of change brings with it challenges that have wide public interest in the subject and are often also accompanied academically. In Berlin, a variety of initiatives and platforms that deal with urban research and activism exists – but found especially among students from different urbanistic study subjects to date little exchange with each other instead. town: make has set itself the objective as a network to fill this gap.

The network of young Urbanist_innen city: and therefore make the educational work of the Berlin Heinrich Böll Foundation organize a barcamp to urban space to research and interventions, which focuses on networking, transdisciplinarity and knowledge sharing. A Barcamp is an open meeting at which decide the Teilnehmer_innen as Teilgeber_innen itself on the content and actively participate in the implementation of workshops, meetings and discussions in the open-space principle. Rather than passively consume “Expert_innenwissen”, the participants should exchange outside scientific hierarchies based on their existing levels of knowledge with each other, learn from each other as well as support existing projects and ideas.

You research in or about the urban space?

You are interested or criticize the current urban development?

You are part of urban interventions or work in urban space projects?

You want other Urbanist_innen know and get inspired?

Then become part of the city: make Barcamps and rejoice with us for an exciting weekend!

The Barcamp
As a kick-off event, we decided for a Barcamp, which on 4 and 5 April 2014 is to take place. A Barcamp is an open meeting at which decide the Teilnehmer_innen itself on the content and actively participate in the implementation of workshops and meetings in the open space principle. Originally emerged from the scene of the Programmierer_innen and Webentwickler_innen finds this format now also in other areas such as political education or social Unternehmer_innenszene application. In contrast to conventional meetings (also called “Unkonferezen” period) is the participation in Barcamps usually free and there is no prominent Redner_innen and keynote lectures. Although topics for sessions can be proposed in advance, the exact content of the meetings and a schedule will be worked out together but only at the beginning of the camp. At the meetings themselves are particularly concerned with the exchange of existing knowledge and the common Discuss problems and solutions.

During breaks and at an evening event, there are also plenty of opportunities to personally meet in a relaxed atmosphere.

An event of the  education work of the Berlin Heinrich Böll Foundation  and the network city: make http://stadtgestalten.net/

Implemented with funds from the German Lottery Foundation