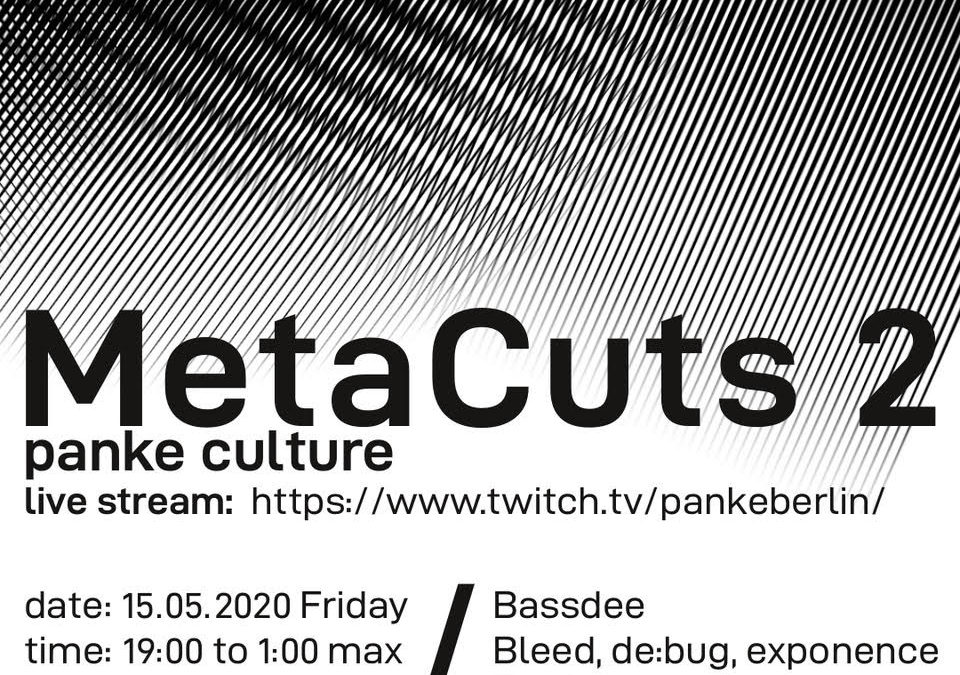 METACUTS 2: DnB Streaming event with BassDee | Feed and visuals by Alexej ParylaLive at www.twitch.tv/pankeberlinMETACUTS seeks to promote a dialogue between the different generations, inviting local and international artists to its stage. When D&B and jungle meet urban bass and dub culture with a focus on the connection between digital and network-based arts and on those, that work with sound and poetry. All associated with club culture. We promise a night of visual artists, creating the subject of the night themselves and bringing back the 90s community on stage again. We’d like to recreate the atmosphere from back in the days and give a new life to a community 90s kids of today.This week we’ll be introducing the artists performing on the “Radio Massive” floor! The old school junglists among you may remember the name from the mid-90’s, where “Radio Massive” became Germany’s first regular FM broadcast featuring the new sounds of the UK. 25 years later, the original jungle sound is still alive and kickin’!★ Bassdee (Radio Massive, Hard:edged // Berlin)
https://www.residentadvisor.net/dj/bassdee
Bassdee’s musical journey dates back to the late 80’s, where he witnessed firsthand the transformation of Berlin’s industrial and techno scene. He was heavily influenced by the then newly-established HardWax store – who were among the first to begin importing the sounds of Detroit, Chicago & New York, thus playing a vital role in establishing the dark, futuristic sound which became notorious in Berlin at the dawn of the 90’s.
As the sound continued to evolve – with the UK jungle mania reaching Germany in the early 90’s – Radio Massive was born! From 1994-1998 the show was broadcast every Monday on kiss.fm, featuring renowned guests from the UK, as well as nurturing and promoting fresh talent from Berlin and around Germany. As a founding member of the Hard:edged nights, Bassdee was constantly at the forefront of the Berliner jungle scene, and can be described as a true veteran!
______________________Our next guest performing on the “Radio Massive” floor on December 7th is another long-time veteran who has continuously been at the forefront of the German Jungle / Drum & Bass scene since it’s emergence 25+ years ago!★ DJ Feed (Radio Massive, Exponence // Berlin)
https://abassodyssey.com/crews/radio-massive/
Bass Terror member, Hard:Edged founder, Radio Massive co-host and Exponence originator, DJ Feed has been one of the most influential and driving forces behind the Berlin Drum and Bass scene since the early nineties, and has been keeping the pulse of deep innovation and relentless futurism in music and nightlife constantly on its toes. His ultra-funky DJ-style, turning even the most complex breaks into instant rewind material, still thrills floors whenever he appears for one of his elusive sets.Alexej Paryla, stage designer. After an apprenticeship as a stonemason first working in the trade, then a study of scenography at the art school Berlin Weissensee. Since creating installations, designs for exhibitions and theatre.Panke, Friday, 15 May 2020 from 19:00 to 01:00
https://www.panke.gallery/event/metacuts-2