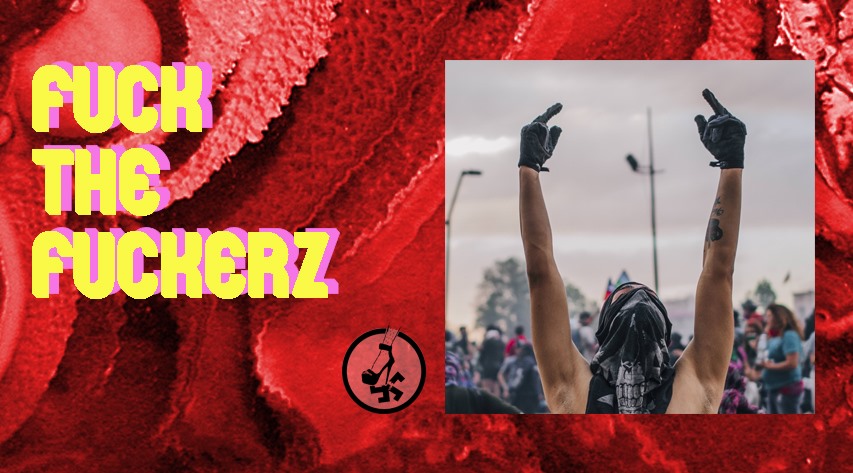 fundraising for Sagrada Mercancía,
independent artist-run space in Santiago that opened its doors to protesters in need offering shelter, medical care and legal advice.
THE GROUND IS SHAKING. THE ROOF IS ON FIRE. PUT YOUR BODY WHERE IT NEEDS TO BE. HIT ME BABY ONE MORE TIME.
–
DJS/ PERFORMANCES
Antuantu
Eli
Amigdala
Marianne/ Ula / Marcelo
Alada
Marce
—
What’s going on RIGHT NOW in Chile is a result of A LOOOONG accumulation of discomfort, anger and powerlessness stemming from a series of measures that have made the lives of indigenous communities, workers, students, peasants and migrants extremely precarious FOR TOOOO MANY YEARS. This is strengthened by the neoliberal model established during the dictatorship serving the conservative political elite and implemented by the force of the military with the ENORMOUS influence of the USA government (that’s a secret don’t tell any1 plz).

The only way ordinary people can access healthcare and education is by putting themselves in HUGE debt. You got to WORK WORK WORK WORK WORK. Pensions are a JOKE (JOKE JOKE JOKE JOKE). Even water is privatised. FCK THE FCKERZ! In hospital the cost of each plaster you use is added to your bill. FCK THE FCKERZ! We demand the de facto implementation of the new social pact coming from the needs of the people rather than the elite, the abolishment of the Constitution of the Republic that was approved in 1980, in the midst of the dictatorship, and the end to STATE TERRORISM and violations of human rights.
FCK THE FCKERZ! X 1,200,000
–
Put your body where it needs to be.
Turn off your TV.
Set your euros free.
—
‘Hit me baby one more time´ Britney Spears
‘The rule of law is inferior to the rule of anarchy’ Marquis de Sade
‘it’s like a foreign invasion, alien, I don’t know how to say it, and we don’t have the tools to fight them’ Cecilia Morel, Chilean President’s wife.

—
Racism, homophobia, transphobia, sexism, ableism and ageism will not be tolerated.