All Tribes 005 w/ Stryda and Galgo 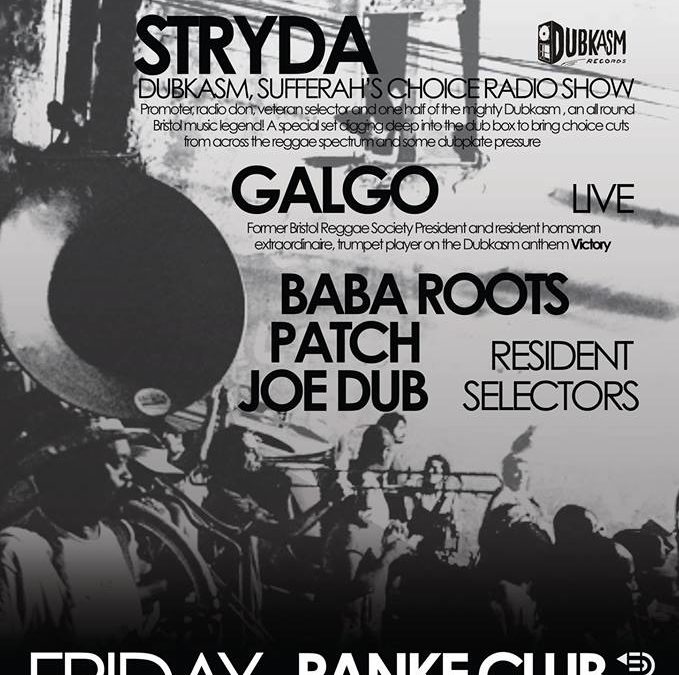 All Tribes family back once again with some very special guests:

It’s an honour to be joined for this session by an old friend and true Bristol legend. Stryda is a veteran selector and, as one half of Dubkasm, has reached international acclaim in the roots and dub music scene. They manage to keep the music relevant whilst still staying true to the form and have worked with everyone from the likes of Dub Judah, Levi Roots and Aba Shanti-I to Mala, Pinch and Rider Shafique. Affiliated top quality record labels Peng Sound, DEEP MEDi and ZamZam Sounds, it is no exaggeration to say that they are responsible for some of the biggest records to come out of the scene in recent years and their music has taken them to audiences all around the world.

For those that know, Stryda is also a hugely influential figure in his own right. For 20 years he hosted the Sufferah’s Choice radio show. From its beginnings on pirate radio, it became an institution with listeners worldwide tuning in to hear the best in new releases as well as selection from Stryda’s deep collection. In Bristol, he is a stalwart for the scene and continues to support the up and coming local talent as well as the sound system scene. Alongside @Bristol Reggae Society, he started Teachings in Dub, which began as the sister night to Pinch’s Subloaded. It has now become the premier sound system night in Bristol and brings the best from around the UK and beyond to Bristol’s legendary Trinity Centre.

We are very excited to host Stryda here in Berlin. He’ll be playing a special set, digging deep into the dub box to bring choice cuts from across the reggae spectrum. Expect to hear some 90’s JA, roots and revive, UK dub and of course, some dubplate pressure!

Like All Tribes members Baba Roots and Patch, Galgo came through the ranks of Bristol Reggae Society. The collective would run monthly sessions in one of Bristol’s most famous reggae venues, Cosies! The sessions became well known in the city, especially for the live element with Galgo, and later others, jamming over versions and dub mixes. Galgo is an incredibly talented trumpet player with a real feel for the music and the ability to improvise hooks on the spot.

He started to collaborate with Dubkasm and during one session in the studio, they created the monumental anthem, Victory! Originally championed on dubplate by Aba Shanti-I, it became a crowd favorite and was well known before even seeing release. It then became one of the biggest selling roots records in decades, seeing versions from the likes of Luciano and Turbulence and a remix from Mala.

Now based in Barcelona, Galgo will be flying in with his horn to nice up the dance for this reunion session!